Written by Terri Gravitt. Posted on May 31, 2021 in Community & Culture

Imagine living in a time when castles, knights and chivalrous romance were the norm-a place of kings, lords, vassals and peasants… the Middle Ages.

If travel to such a time was possible, Dr. Craig Nakashian would be the perfect tour guide. He is a medieval historian and professor at Texas A&M University-Texarkana. “I had always enjoyed history, but as a kid I was mostly into the U.S. Civil War, and later, World War II,” he explained. “When I was a senior in high school, my stepfather set up a meeting with one of the historians at Western New England University (then College). When I went into his office, it was cluttered with maps of Medieval England, books, papers, a shield, etc.,” he shared. The disordered workspace of mappa mundi, tomes, papers and a shield birthed an interest in the Middle Ages that would grow into a lifelong passion and career of teaching. “While I gave some thought to becoming a lawyer, or joining the military, those were never particularly serious goals (to the benefit of both the legal profession and U.S. Armed Forces),” he jokingly continued. “I knew ultimately that I wanted to teach, and teaching college students seemed the best opportunity to really engage with a topic and discipline and to share it with students of all ages.” His goal of student engagement seems to have been very successful as Katheryn Hartshorn, colleague at TAMU-T shares, “Dr. Nakashian is very popular with students, not only for the expertise that he brings to his subject, but for his engaging teaching style. Having earned his master’s degree in Medieval History at the University of Durham in England, Dr. Nakashian has fascinating stories related to their studies that make students want to learn more and do research of their own. He is known for his willingness to meet with students, whether they need direction in their coursework or just want to talk and share their interest in history.”

Originally from Wilbraham, Massachusetts, “Home of Friendly’s Ice Cream,” Nakashian earned his undergraduate degrees in the neighboring town of Springfield and his master’s degree from the University of Durham in northeastern England. That is where he met his wife, Zoe. “She was pursuing a master’s degree in the conservation of historic objects, but ironically we met at a Christmas party at a flat shared by someone in her department and someone in mine.” Zoe moved to the United States after she and Craig got married, and Craig started his PhD at the University of Rochester. They lived in Rochester for five years and it was during this time their son, Meran, was born, followed by their daughter Pelin, who was born during their first year in Texarkana.

History is not black and white; it is written in shades of gray.” —Dr. Craig Nakashian 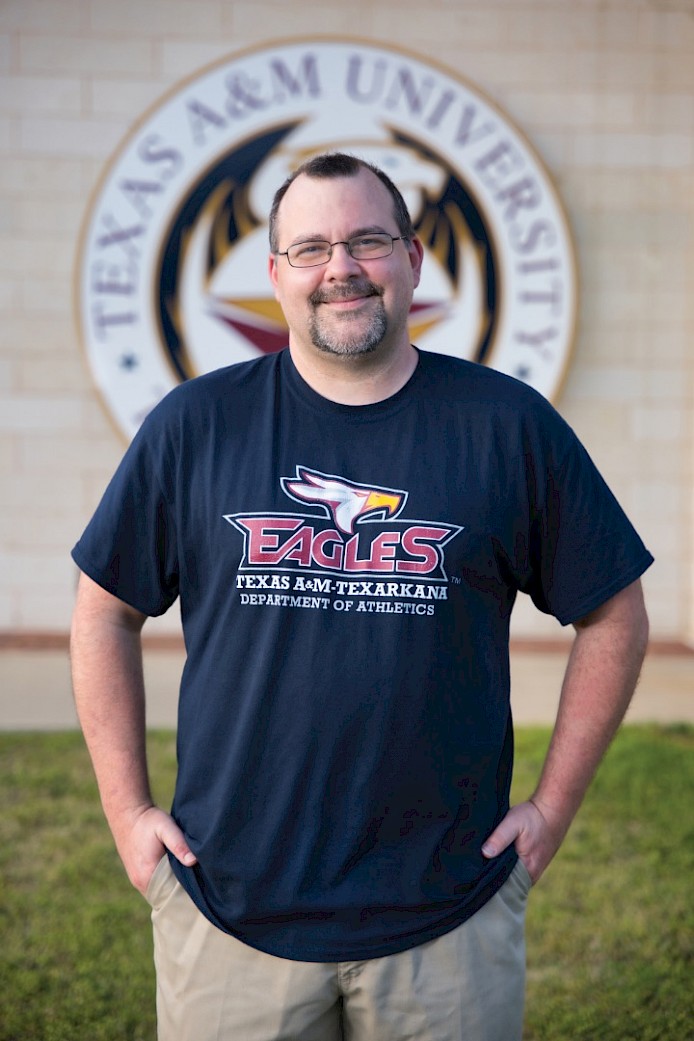 Nakashian had a one-year position at Southeast Missouri State University in Cape Girardeau, Missouri, while finishing his PhD. During that year, a position became available at Texas A&M University-Texarkana for a medieval historian who could also teach ancient history. Having taught ancient history for three years at Syracuse University while doing his PhD, he decided this would “fit the bill.”

Nakashian’s wife, Zoe, is a District Executive for the Caddo Area Council of the Boy Scouts of America. Before that, she was the Collections Manager at the Ace of Clubs House for the Texarkana Museums System. Meran and Pelin both attend Pleasant Grove schools. Meran plays saxophone in the band and video games at home. “Pelin,” her father jokingly adds, “largely believes she’s a cat.”

“The old adage is that if you do not know history, you are doomed to repeat it. That isn’t true, really,” according to Nakashian. “As Mark Twain supposedly said (but probably didn’t) ‘history doesn’t repeat itself, but it often rhymes.’ So, while history doesn’t repeat, we do see patterns and similarities.” An understanding of history means a better understanding of people. “History encompasses everything about people,” he said. Historians essentially have to be “jacks of all trades,” needing to understand politics, religion, psychology, social forces, economics, culture, etc. Being an expert in all these areas may not be realistic for most, but Nakashian believes we all need to recognize how they each fit together and interact to create historical reality. “I believe it is important to try to get as strong an understanding of history as possible; immersing yourself in historical inquiry will help you understand people themselves, but also human institutions.”

“All history,” Nakashian goes on to share, “is interesting because history is, at its heart, the study of humanity. To paraphrase the celebrated French medievalist Marc Bloch, a medieval cathedral and the local post office are both ripe for historical inquiry. Both have stories to tell. History consists of both the exceptional and the mundane. The Middle Ages were fascinating for a variety of reasons. It was a very different world than ours, but in it we also see commonalities of human experience. I am always interested in seeing how people in the past approached problems that are both specific and eternal (building an orderly state, finding their religious identity, etc.) and the medieval period is a rich world to study for those questions.”

According to Nakashian, “students probably learn the basic facts about United States and Texas history, and a bit about previous periods. However, the obsession with standardized testing and quantitative assessment undermines what true education is about, which is teachers engaging with students and fostering in them tools to critically approach educational topics. The best approach is to fund schools adequately and then stay out of their way while they do their jobs.” He continues, “That is oddly not a popular position among politicians (despite it being true) .... I think that for history (like the other humanities) standardized testing is especially detrimental. History is not black and white; it is written in shades of gray.”

For hundreds of years, the Middle Ages has remained a fascinating time in history, and that fascination is made clear through the success of popular places like Medieval Times and widely attended Renaissance fairs. Nakashian suspects this could be because the Middle Ages were what he describes as a period of “enduring romantic appeal.” He goes on to laughingly say, “While we have a plethora of RenFaires, for instance, I haven’t seen an Ancient Rome Fair recently. Apparently, no one wants to dress up in a toga and debate imperial sewer policies.” His assumption is that the Middle Ages intrigues us because “it harkens back to a ‘simpler’ time - a time of castles and knights and chivalry. We live in a post-industrial, largely urban world, and we imagine the medieval period as one of heroes and magic. Tales of magic and monsters often take on a vaguely medieval setting (Lord of the Rings is a great example), rather than a Classical Roman one, or a nineteenth-century industrial one (though we do see that with steampunk fiction)–those are too urban and familiar to us. The medieval time period is appealing precisely because it is a style of human society that we no longer live in.”

Nakashian does his part to try to spread his passion for history into the minds of people outside of the college classroom as well. “I try to engage with public-facing history as much as possible.” He has spoken to the Rotary and Kiwanis Clubs, as well as the Texarkana Museums Systems and the Hardy Methodist Men’s group. “I’ve done podcasts and YouTube interviews, and published in popular publications, but I would always enjoy doing more with youth-focused events,” he said. Nakashian recently gave a talk at Texas A&M University-Texarkana on Mark Twain’s Connecticut Yankee in King Arthur’s Court from 1889, which satirizes our romantic attachment to the medieval period.  “[Mark Twain] suggests (perhaps only tongue-in-cheek) that Walter Scott, the author of Ivanhoe, should be blamed for the U.S. Civil War, presumably because southern gentlemen tried to emulate medieval knights,” he shared.

Teachers like Dr. Craig Nakashian are the ones you want to listen to more closely because their passion is infectious. Dr. Del Doughty, Dean of Education and Liberal Arts at Texas A&M University-Texarkana, shares, “The thing that amazes me about Dr. Nakashian is his ability to draw anyone, regardless of background, into history. I’ve had computer science majors tell me things like ‘Dr. Nakashian’s class really doesn’t relate to my major, but I found the subject really interesting and will probably think about it a lot.’ I think Dr. Nakashian has that effect on people because he genuinely loves history and genuinely loves talking to students. I think that students know he is rooting for them.”