From Devastation to Determination

Wearing striped pajamas, laying on a bed of wooden slats, a 13-year-old orphan girl named Alexandra wished for death. Considering the many ways she might achieve the desired result, she whispered a prayer asking God to let her die when she says God answered her, almost audibly saying, “I need you to love my people.” It was at that moment that a defeated child living in a Nazi concentration camp had her heart miraculously move from a place of devastation to one of determination. That night, a ripple effect would begin that would go on to see hundreds of lives saved and forever altered.

In Sarajevo, Yugoslavia, Alexandra was born along with her twin brother Valoydsa in 1929. Only a few short years later, her mother passed away leaving behind the twins who were now three years old, and an older brother, Egor. Alexandra lived a life of privilege with a successful father who was working for King Alexander. Her father provided the children with a lovely home and a governess to care for them when they were home from boarding school. Alexandra recalls the gorgeous roses that filled the gardens at their home with a promise from her father that he would someday fill the church with roses on her wedding day.

In 1942, as was typical, Alexandra was sent to boarding school with the usual promise from her father that he would pick her up when the term was over. However, the girls from the boarding school were abruptly sent to an orphanage in Belgrade as the area had begun to endure bombings. She would later learn that her family home had been bombed killing her twin brother. With limited information and the heart of an innocent child, Alexandra did the only thing she knew to do, she waited for her father to pick her up as he said he would.

Alexandra recalls sitting at the orphanage watching each time the gates would open thinking, “This is it! Someone is coming looking for me!” Eventually, she was correct, the gates would open to a visitor who held her picture asking if anyone recognized the child. The soldier showed the photo to the nuns at the orphanage explaining that he had served under her father’s command. Believing the young man would survive, her father instructed the young soldier to go from orphanage to orphanage until he found his daughter and let her know that he did not survive. After that, Alexandra knew that she was alone, therefore, she quit waiting to be saved.

One night, a group of German soldiers came into the orphanage instructing them to wake up and load up in a waiting truck. The driver would deliver the vehicle full of children and nuns to a train station. She recalls one nun in particular who was an older woman with beautiful gray hair and lovely blue eyes. She remembers the moment this woman was separated from her and the other children and how a feeling of confusion set in. Up to this point, she did not know that these soldiers were not looking out for them. The children were then marched to a cattle car that was already packed full of people. While it seemed impossible, the soldiers somehow managed to cram them inside. After traveling for what felt like a lifetime, the train stopped and the soldiers threw rotten potatoes into the cattle car causing a fury of activity as the starving people clamored to the ground grasping for scraps as the soldiers mocked them, calling them pigs.

After arriving at their destination, Dachau, she looked upon a place that was surrounded by fences and filled with people wearing striped pajamas. Soon after arrival, her head was shaved, she was stripped completely naked in a large room, sprayed with cold water, and covered with a strange powder.  She was given her own striped clothing before being shuffled to the barracks where she would be assigned back-breaking and heart-breaking work to do each day. Alexandra, only a teenager at the time, would live in these unbelievably nightmarish conditions for four months until she was told to board yet another train.

She was relocated to a labor camp on the Island of Rügen. Here, Alexandra would endure both grueling labor as well as medical experimentation. She survived a multitude of unknown injections and was even tied to a chair where her tonsils were removed without anesthesia. Many did not survive the cruel abuse while others who did, chose to take their own lives when left unsupervised in the barracks. Days were filled with back-breaking work and nights were unbearably cold with rats coming to nibble on fingers and toes while they lay on hard wood slats for beds. In these horrific circumstances the words of her late father would echo in her heart, “Alexandra, I want you to remember something. I will not always be around you. But someone who is always there and is always watching is our God.”

As Alexandra considered that God was always present and always watching, she began to become embittered asking, “If He is a loving God, why does He let this happen?” It was at this point, with a bitter, angry heart that she only wished to die. She crawled to the top of the wooden beds, that were more like shelves shoved up against the wall, and said to God, “If you really love me, you’ll let me die. Please, I cannot live like this.” The encounter she had with God that night changed her heart completely when her desire to live was fully restored and she was resolved to live her life surrendered to God’s calling to love his people. She recalls leaping from the bed in the morning with renewed energy and running to get in line for her daily work assignment. She told all of the other girls around her, “Guess what? We are going to be okay! God is with us, Jesus is watching and we are going to be okay!”

One day, with a renewed sense of hope, she began to notice that there were not as many soldiers watching over them as usual. She rallied a group of ten girls, confident that God was calling them to make a bold escape. They waited until the cover of night and crawled on their bellies to the gate which was miraculously open with one soldier and a dog standing nearby who never made a move as they each slid out of the open gate, then out of sight. Knowing that the only way off of the island was by train or boat, they made their way to the train station finding an empty cattle car like they had arrived on. They waited in the motionless cattle car for what seemed like an eternity until it eventually began to move. The train traveled for days before it finally came to rest in what appeared to be a forest. One of the bravest girls in the group peeked her head out of the train car and saw that the train was very long and filled with German soldiers who were all abandoning the train and leaping into the forest in a panic.

One young soldier locked eyes with the girl and motioned for her to jump off of the train as well saying, “Jump! Run! Fast!” Convinced that he was helping them, they jumped and made their way to safety in the forest only moments before the train exploded.

Later the girls would understand that the allied Russian troops were advancing and the Germans were leaving the island and trying to avoid capture themselves. The group of girls found a village where they sought shelter in an underground bunker that had been used by villagers during bombings. Eventually, Alexandra saw a soldier passing by the street-level window in what she recognized as a Yugoslavian uniform. The soldier took them to a liberated camp where Alexandra was met with her first introduction to America, she was handed a package from the American Red Cross and tasted peanut butter for the first time in her life.

She would later find a home after the war in America where she met the love of her life, George. The two made an incredible pair, both determined to live their lives in a way that held eternal significance. During their retirement years, they developed an adoption agency that helped over 250 Russian orphans find a home with six being adopted by the Goode family.

Alexandra, once a Russian orphan herself, says that she is motivated to fulfill the calling Jesus put on her life that night, laying in the bunks at the concentration camp to simply “love his people.”

Photos (courtesy of Cornerstone Methodist Retirement Community and the Goode family.)
1. Goode at the age of 18 when she arrived in America aboard the S.S. Marine Swallow following her rescue.
2. A similar cattle car that was used to transport prisoners.
3. The clothing pictured is a sample of the outfits provided to prisoners of the concentration camps where Alexandra spent time.
4. The barracks similar to where Alexandra would sleep at night.
5. Goode smiles in her engagement photo in 1951.
6. George and Alexandra Goode.
7. The entire Goode family gathered around Alexandra in 2019 at George’s funeral. 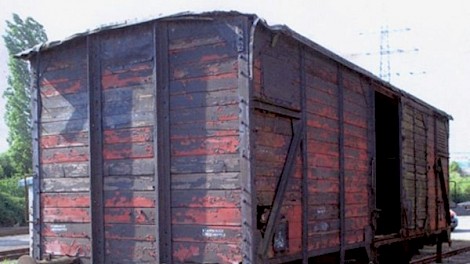 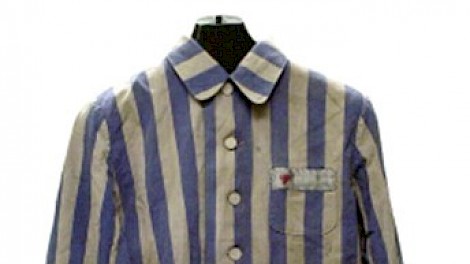 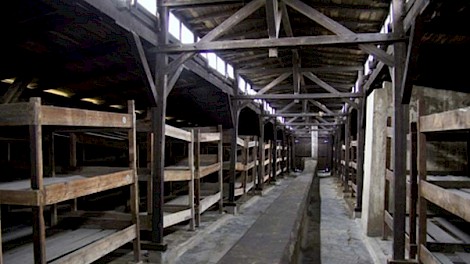 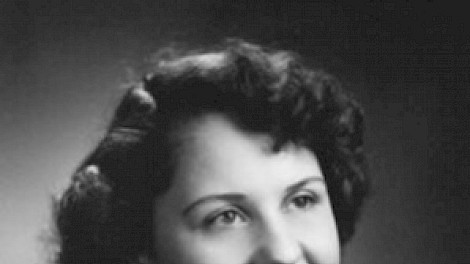 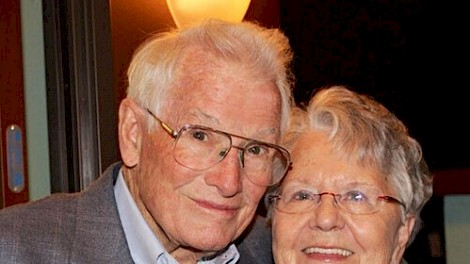 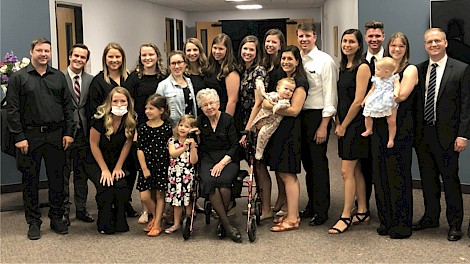