Written by Jonathan Weaver. Posted on November 28, 2020 in Sports & Entertainment

“The Grove is a family. That is what sets us apart from a lot of schools.”

And that family has been extremely successful, winning two University Interscholastic League (UIL) Texas State Football Championships in the past three years. This year, the Hawks are state ranked and well on their way to making a fourth consecutive trip to AT&T Stadium for the UIL State Title game. This season of so much promise and historical significance started with devastating news; Marcus Burris, the four-star defensive tackle and Texas A&M commit, would not play because of an Achilles tendon injury.

“Heart breaking! I told him that I was so proud of all the hard work he put in over the summer preparing to make his senior year his best. I also told Marcus that God is always in control and something good will come from it.” That was the reaction and words of Marcus’ mother, Shirley Burris, to Marcus when they found out the news. “I’ll never forget that day in the doctor’s office with Marcus and some of the PG coaches. To hear that Marcus’ season was over was very difficult to hear. Pleasant Grove Head Coach and Athletic Director Josh Gibson, of course, cried and prayed along with Marcus and the rest of us. Even the doctor had tears in his eyes.”

“My family has been a huge part in this. Without them, I wouldn’t be the person I am today. My mom and dad make sure I stay happy, and I’m extremely lucky to have them and the rest of my family by my side,” Marcus said. Family has always been a big part of Marcus’ life and he has always looked to make them proud. “I want to give back to my family. They have done so much and sacrificed so much for me, so I feel it is my duty to make them proud. Also, my coaches have done a great job being great role models and I want to make them proud as well.”

Just because his playing career is over at Pleasant Grove, it doesn’t mean that his time around the team or on the football field has come to an end. Shirley said, “Marcus still participates in everything. He believes in his teammates, and he wants to support them and cheer from the sidelines. Marcus also encourages his teammates to be grateful for every opportunity they get to take the field and to always give 200%.” Pleasant Grove coach Steve Morris said that Marcus takes an active role during practices throughout the week. “We give him a few kids to coach and work through drills with. He has such a positive attitude and willingness to help this team. It’s cool to see. Marcus is also wearing a headset on the sidelines for us on Fridays and helping the coaches. He is just a great kid.”

Marcus said, “I’ve learned so much from this injury, starting with the knowledge of the game. I’ve been able to just sit back and learn from some of the best coaches in the state. That has really improved my understanding of the game. It has also helped with my leadership skills. I’m in a position now where all I can do is teach and encourage, so I’ve been trying my best to do my part and have those guys’ backs like they have mine. Not being able to play definitely sucks, but the guys have been doing great without me. I’m just happy to be with them every Friday night and watch them go to war.”

“Marcus is actually very shy, but you wouldn’t know that if you see him with his football family. He’s very silly and likes to think he is the go-to guy for everyone needing advice. It has been a blessing watching him grow into the person he is today,” Shirley said. Coach Morris said, “It’s been a blast watching Marcus grow up and mature to the leader he is today.”

As a four-year starter on varsity, Marcus and his family had to adapt to his talents early on. Shirley said, “During Marcus’ freshman year, he was so excited to play on varsity. I was worried about Marcus being moved up playing with the older players. I’m in the stands watching his every move. It is his time, and here comes the very first play of his varsity career. Marcus gets hit, and he gets the wind knocked out of him. They stop the game, and he is down on the field, flopping around like a fish. The trainer and coaches run to his rescue. That would be the one and only time that they would have to help him off the field. Marcus learned very fast to be the one that would be giving out all the hits. I am so looking forward to seeing Marcus in the next chapter of his life.”

This Hawk alum will lace up his cleats next season for the Texas A&M Aggies. After being recruited by a long list of top tier football programs, Marcus felt most at home in College Station. Marcus said, “It is truly a blessing being recruited by some of the top schools in the nation. I couldn’t be more thankful for this opportunity and I can’t wait to show the world that I can help a program like A&M. Making a final decision was very hard because all the schools recruiting me are great, but it truly came down to what my heart felt was best. I feel like A&M is the best fit for me. College Station was just a different feel. When I went to visit, it just felt like one of those places you could make a home.”

Shirley said, “Marcus and I still talk about it like it’s a dream—a really good dream, one you never want to wake from. The opportunity to meet so many great coaches has been unreal. We are so fortunate and grateful for every offer Marcus was blessed to receive. The final decision was so hard! We prayed and believe Texas A&M is the perfect fit for Marcus personally and to further his career as a football player. Our whole family is very excited about Marcus being an Aggie. We are looking forward to supporting him as he transitions into playing at a different level. Marcus’ family has traveled in from miles to see the Hawks take the field. Now they will be sporting that maroon and white.”

Family has always been a huge part of the Marcus Burris story. Family built him into the four-star athlete at Pleasant Grove, family kept him strong and leveled after suffering a season-ending injury, and family is the reason he made the decision to attend Texas A&M University. 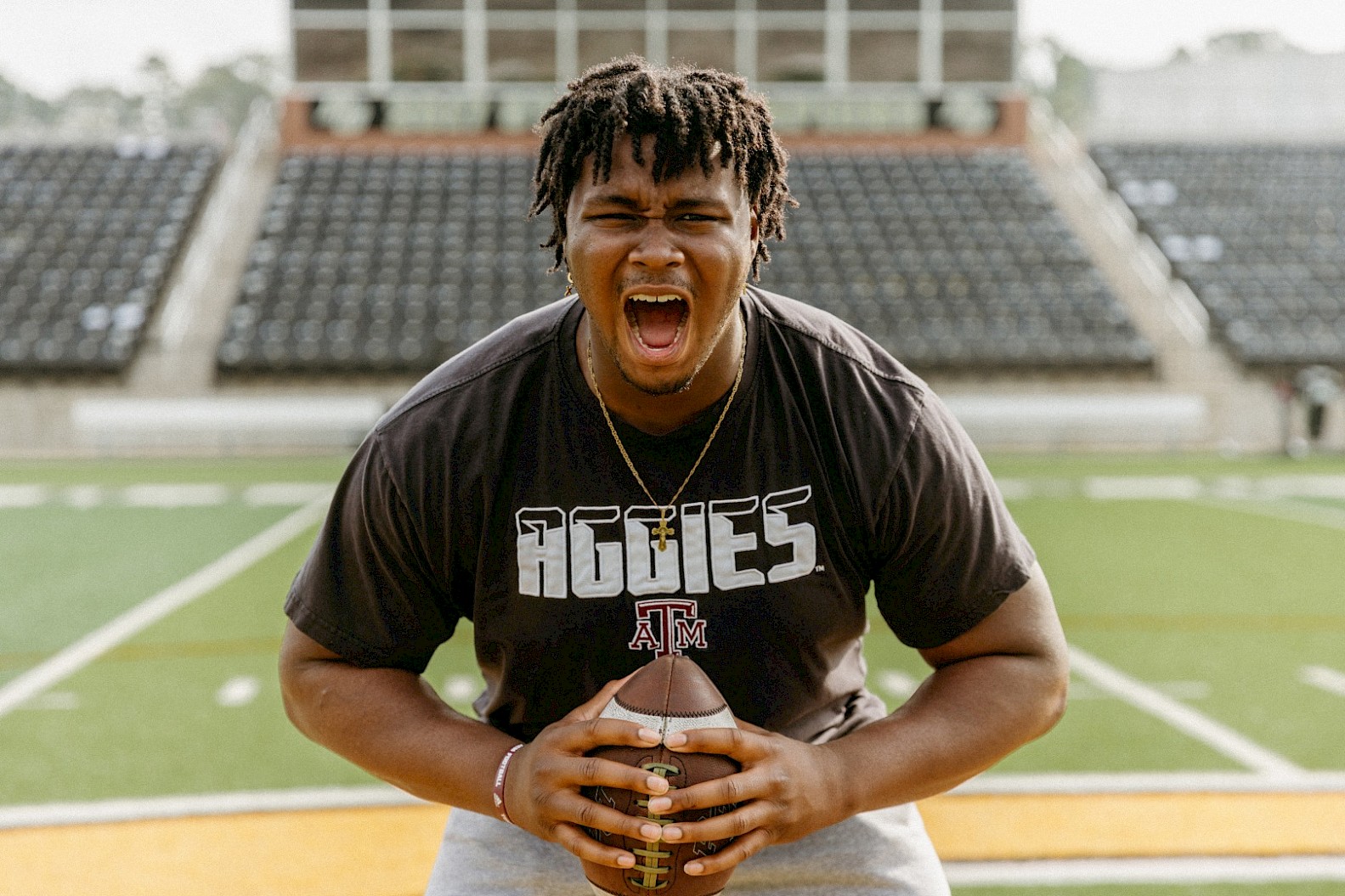