Written by Jonathan Weaver. Posted on May 31, 2021 in Sports & Entertainment

Graci Henard stepped up to the 15th tee box of the 2020 Jay Brewer Memorial Lady Tiger Classic at Texarkana Country Club, down five strokes with four holes to play. After a 30-foot birdie on the 15th hole and a par on the 16th, Henard was still down three strokes with two holes to play. During this improbable comeback moment, she kept saying to herself (and out loud) “I want it more than her. I want it more than her.” After forcing a playoff by birdieing three of the last four holes, Henard won the playoff by sinking another birdie putt—this time from ten feet away.

“It was Brewer’s tournament. And I miss him every day, so winning it was more than another trophy for my shelf. It was the smile from him I felt as he looked down,” Henard said. Jay Brewer was Henard’s former high school golf coach at Texas High, who passed away unexpectedly during the summer just before her junior year. “I will never forget that day when I won that tournament. I felt so entirely loved that day. The feeling was indescribable.”

Ryan Huntze, Henard’s golf coach at Texas High, said, “No female golfer from Texas High had ever won our tournament, and Graci became the first. It was extra special because of the bond she and Coach Brewer shared. Graci told me last year one of her goals was to win that tournament for him, and the way she did it was truly remarkable.” According to her mom, Joy, Coach Brewer used to tell Henard, “grit was the best club in her bag.” Nothing could have been truer, revealed by the way Henard came back to win that tournament.

Golf is such an individual sport, but it represents me as a person.” —Graci Henard

A golfer and recent graduate of Texas High, Henard learned the game of golf with her family at an early age. She said, “I would go to the golf course with my dad and sisters to hit golf balls or to play holes. I played so many sports growing up, and golf was the one I chose. It’s a sport I can always work at getting better at, and I can enjoy the rest of my life. I also chose it because of the responsibility it requires. Golf is an individual sport, so I have to rely on myself. My mistakes are my own and that’s what motivates me to better my game.”

Henard’s dad, Jeff, mimicked those words of wisdom. He said, “Golf is a game you will never master. It’s one where you only hope to get better. I tell Graci to be patient and let her practice become permanent. Her worth is more than the number she posts on the course on a given day.”

Henard’s work ethic and passion are just a few of the characteristics she is known for among her family, coaches and teammates. Coach Huntze said, “If it’s cold and rainy, she would still be out there practicing. It did not matter what the conditions were, she would be out there. Graci was always the first to get to practice and the last to leave. You can tell how much she loves the game just by watching her practice.”

Her father said, “Graci’s dedication and sacrifice have been inspirational. On summer days before she could drive, she would beg to be dropped off at the golf course by 8 am and wouldn’t be ready to be picked up until after 5 pm. Those summer days could have been spent playing with her two younger sisters, but instead she chose to work on her game. She has missed sleepovers and other fun activities to practice. The goals she has achieved and the success she has experienced would not have been possible without this tremendous amount of effort on her part.”

Henard said, “Golf is such an individual sport, but it represents me as a person. I am extremely independent and take responsibility for myself… Competing in such an individual sport allows me to depend solely on myself. In team sports, there are so many parts of the team, and sometimes, losing is not your fault. I have had to learn to accept my failures as my own, which has really developed me as a person and taught me a lot of valuable lessons that carry over not just in golf, but in school and life.”

Henard will continue her golf career beyond Texas High School when she enrolls at Dallas Baptist University this fall. “After some thought, I chose Dallas Baptist [University] (DBU) over Oklahoma Christian University and Middle Tennessee State University. I chose DBU for the competitive atmosphere and Coach Trapp. He is going to push me and help me reach my full potential.”

Joy Henard said of her daughter’s college opportunities, “I was praying for the perfect coach at the perfect time. Then came along Coach Kenny Trapp, the six-time National Christian College Athletic Association National Golf Coach of the Year and Head Women’s Golf Coach at Dallas Baptist University. When recruiting regulations were lifted, we traveled to Dallas to meet Coach Trapp, and the rest is history. We could not be more thrilled that Graci will be a future Patriot and are excited that Coach Trapp will be the one to take her to the next level.”

Henard’s dad also couldn’t be happier that she is headed to DBU. Jeff said, “When the recruiting process started and I looked at schools, DBU secretly was my top pick. It’s a small conservative Christian school, a top five nationally ranked girl’s golf program and a coach who won National Coach of the Year in 2020. I didn’t care what division, or how big the school was, I wanted her to go to a school that would grow her into a godly woman and help her become the best golfer she could be. I believe she is going to that place and can’t wait to see what God does with her.”

Henard’s parents hope that the lessons she has learned on the course stick with her throughout the rest of her life. “The game of golf has helped us teach her so many great lessons about life itself. ‘Lessons like there is no substitute for hard work. The more you put into it, the more you get out of it.’ Lessons on perseverance. ‘You have to learn to overcome a bad shot or decision on the course and sometimes even a bad break, so that it won’t affect your entire round.’ Lessons like humility. ‘You will win some days and you lose some days; just never give up.’ The memories on the course and lessons golf brings will continue on indefinitely as she ages.”

“It has always been a dream of mine to play professional golf. I trust that wherever I end up, God has a plan for me, even if it means I won’t play professionally. I know that I have the drive and determination to get to that level, but in the end, golf isn’t everything,” Henard said. “My role on the golf team is merely a role that God is using to impact others’ lives by working through me. I don’t know what the future holds, but I know God knows where I’ll be in five, ten and twenty years. So, planning to go pro is a goal I plan on pursuing, but whatever God has in store for me is something I want more than my desires for personal fame. In the end, whatever I end up doing is for His glory, not mine.” 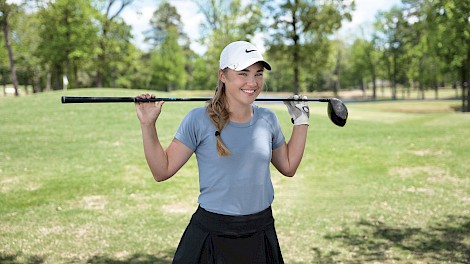 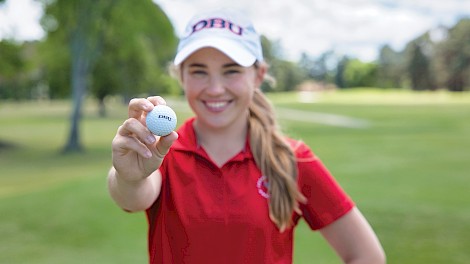