Written by Terri Gravitt. Posted on September 30, 2021 in Community & Culture

Disability activist Robert Hensel, who holds the Guinness World Record for a six-mile wheelie in his wheelchair, has said, “There is no greater disability in society, than the inability to see a person as more.” While it has been seen and proven that people with disabilities bring success, diversity and increased motivation to any workplace, they sadly are still fighting against decades of stigma and discrimination. More companies are slowly coming around and seeing the benefits of fully inclusive hiring, but there is still a great deal of work to be done!

Jennifer Lewis, who has been Chief Executive Officer (CEO) of Texarkana Resources for the Disabled, Inc. since August 2016, fiercely and passionately faces this challenge head on every single day, showing companies in our area that individuals with disabilities are indeed more! A Southern California native, Jennifer moved across country in her early 20s to Washington, D.C. She received her Master of Arts in Education and Human Development degree from George Washington University, where she also gained expertise in vocational evaluation, traumatic brain injury and autism spectrum disorder.

From an early age, Jennifer has been passionate about people with disabilities and volunteered her time serving in the Best Buddies Program in high school and as a leader in a disability partnership program with the volunteer and service center on her college campus. However, her journey eventually led her to working at a police department, which she did while obtaining her undergraduate degree in criminal justice. While doing this work, something inside began to shift for Jennifer and she shared, “I realized then my heart was hardening and the compassionate side of me was fading. I realized my heart wasn’t in law enforcement like it once was and I decided to try to make a career out of the volunteerism I had always loved.” With her mission in life revealed more clearly, she soon became the manager of the Goodwill of Greater Washington Vocational Rehabilitation Services and was responsible for disability employment operations, including launching a new model project search program for transitioning aged youth with disabilities at the Department of Education, the Department of Interior and George Washington University. She discovered her passion lay in education, advocacy and reform and her true gifting was in educating individuals about the abilities of individuals with disabilities, veterans and individuals with other barriers, as this is the way change and progress can truly occur. She wrote programs, curricula, websites, training modules and led committees to move her mission forward. These programs both assisted individuals with disabilities in gaining independence and educating the non-disabled community on integration, accommodations and debunking disability myths.

While Jennifer was thriving professionally, something new and completely surprising was about to happen for her on a personal level. In 2014, a friend invited her to Ashdown, Arkansas, to be Maid of Honor in her wedding. There, she met Trey, who later became her husband. They attempted a long-distance relationship, but after a while it was obvious it was time to go all in. “I decided to quit my job, sell my apartment and move to Foreman [Arkansas] to give it a go.” It is now seven years later, and Trey and Jennifer have been married for five years and they have two children, Lily, who is four, and Wyatt, who is two.

In 2016, Jennifer accepted the CEO position at Texarkana Resources for Disabled, Inc. The center is the outgrowth of a program established over 50 years ago and has been helping individuals with disabilities learn to help themselves in the Texarkana area since 1968. The Work Center was originally in the College Hill area of Texarkana, Arkansas. In 1978, the Workshop Thrift Shop and upholstery program on Whitaker Street in Texarkana, Texas was discontinued to emphasize industrial-type work and subcontracts. After a year of planning, a small business administration loan was secured to build a new facility in the Industrial Park on East 19th Street in Texarkana, Arkansas. The name was also changed to Texarkana Work Center to reflect the Center’s emphasis on “work.”

In 1985, the Work Center began providing programs for Haven Home of Texarkana, Inc., an established residential program for men with developmental disabilities. In 1991, Texarkana Resources for the Disabled, Inc. a 501 (c)(3) charity, was established as an umbrella corporation with board members from both Texarkana Work Center and Haven Home forming one Board of Directors.

The center’s mission is “to provide education, training and support to enable all persons with disabilities to reach their highest level of potential and self-sufficiency within the community.” Several businesses in the community have remained loyal to the center’s mission and support of the cause for over 30 years now. These businesses include INPAC, LLC., JCM Industries, Sterno, HUMCO, Smith-Blair and new partners in recent years such as Cooper Tire. These partnerships were made in connection with United Way of Greater Texarkana.

Services offered by the center have led many clients to successful independent living. The Ross Parker Training Center, named after its founder, is a vocational training center where individuals with disabilities have the opportunity to learn job skills. This is done by partnering with local businesses who send work for the trainees to complete and then it is shipped out. This is a perfect program for a person with disabilities who has never worked before but would like to. Trainees are taught both hard and soft skills of working and completing job tasks. The center also has several community custodial contracts where they go out on job sites and clean. Undertaking these tasks, participants are able to earn minimum wage or higher.

Haven Home is the community living program that comprises an entire city block in Arkansas and provides housing for 15 people with disabilities. There is a community-living home that houses six individuals, two training apartments that house two individuals, and seven duplex apartments that house seven individuals. The goal of this program is to assist those with disabilities to live as independently as possible. They start in the main house that requires 24/7 staff support, and later transition to the training apartment where they do not have staff support at night. They then move up to a duplex apartment. The goal is to assist them with budgeting and finances, paying bills on time, grocery shopping and involving themselves in the community in a capacity they will enjoy, such as participation with a cycling club or a bowling league, or other such options.

While so many lives have been touched and proven to be so much MORE through the efforts of Texarkana Resources Center, Jennifer’s dreams for the organization do not end there! They have just expanded their Resources Unlimited Training Center by renovating a new building with a state-of-the-art ADA training kitchen and computer lab area. This expansion has allowed them to double the numbers of those they can serve in the community by having a new and much larger training space. Their next goal is to offer more housing options, as disability housing in this area is a needed resource. They would also like to expand their training and employment programs. Jennifer enthusiastically explained, “Keep your eyes out! We are up to great things!” 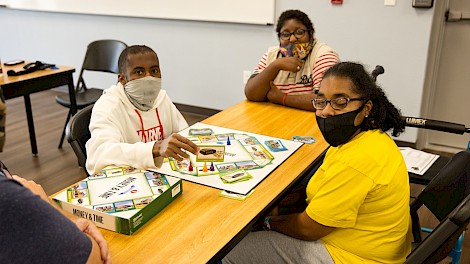 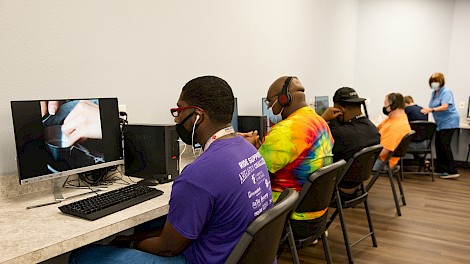 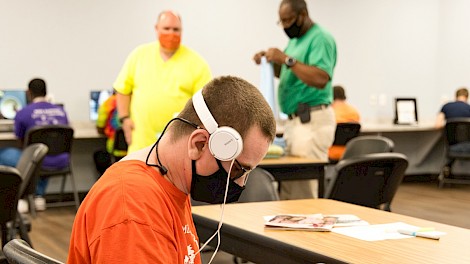