Written by Lesli Flowers. Posted on November 16, 2021 in Sports & Entertainment

November is chock full of important holidays. As I type this, I can’t help but think of the sweet potato casserole that has been swirling through my head since the calendar turned to November first. Please don’t make me choose between marshmallows or pecans, because I like them both and I want them all! On the eleventh, we honored our Veterans, who should be celebrated every single day, but I’m thankful we have the opportunity to recognize these heroes annually. Additionally, it is National Literacy Month and if you are here, I would assume it is because you already enjoy reading, have a love for books, or you’re my mom. Hi, Mom.

I have vivid memories of learning to read in my first grade reading group in Mrs. Parks’ class at Wake Village Elementary. Do you remember our reading contest as kids through the Book It! Program? Let me be clear… I will still read books for pizza if anyone is offering.

On to middle school, where I was introduced to the Accelerated Reader program. But who could forget the classics in Mrs. Schneider’s (now Murry) senior English class at Texas High? I remember little about the Canterbury Tales, but I do often think about Mrs. Schneider (Murry) now when I finish a really good book. I can’t help but acknowledge the part that she and many other teachers played along the path of my life to instill a lifelong love of learning within me.

After moving back, a little over two years ago, one of the first places the kids and I visited was the Texarkana Public Library to get our library card. It has been a lifesaver during the pandemic to reserve books online and drive thru to get them. Perhaps my favorite thing the library offers is The Libby App, which provides access to thousands of eBooks and audiobooks. Libby gives me the opportunity to read or listen to old and new books alike. Occasionally there is a wait time for a book that I’m interested in, but I can easily pass the time with other interesting books that are currently available. You can sign up for an e-card from the library on their website https://txark.ent.sirsi.net/client/en_US/default to access Libby from your device. Parents, my kids love Libby too!

This month I chose to review and recommend a book that I found on Libby that is about a veteran. It’s a book that was published in 2010 and is currently available in regular and large print at our local library or in audio form in Libby. The book is Unbroken: A World War II Story of Survival, Resilience, and Redemption by Laura Hillenbrand. Unbroken resonated so deeply with me that I have often thought back on it and tried to put myself in Louis’ shoes or raft. His bravery is captivating. Louie Zamperini was a promising Olympic runner for the United States when he was called to war as an Army Air Force Bombardier. While on a search and rescue mission, his plane was shot down over the Pacific Ocean and only three people survived. The story documents their steadfast endurance to survive in the middle of the sprawling ocean for 47 days to eventually be captured at the hands of the enemy.

“Though all three men faced the same hardship, their differing perceptions of it appeared to be shaping their fates. Louie and Phil’s hope displaced their fear and inspired them to work toward their survival, and each success renewed their physical and emotional vigor. Mac’s resignation seemed to paralyze him and the less he participated in their efforts to survive, the more he slipped. Though he did the least, as the days passed, it was he who faded most significantly. Louie and Phil’s optimism, and Mac’s hopelessness, were becoming self-fulfilling.” -Unbroken

“When he thought of his history, what resonated with him now was not all that he had suffered but the divine love that he believed had intervened to save him.” - Unbroken

“At that moment, something shifted sweetly inside him. It was forgiveness, beautiful and effortless and complete. For Louie Zamperini, the war was over.” - Unbroken

Ultimately, it’s a story of summoning faith from an unknown place in order to survive in the raft, being a captured prisoner and the entanglements of the mind from the trauma of it all. You will walk away inspired and fascinated by the bravery and the heroism that only a story from the greatest generation can provide.

So, I leave you with this… if you aren’t already a patron of our local library, I encourage you to go check them out along with the book Unbroken. The library’s presence plays a vital part in the betterment of our community. If you are already a card holding member, I ask that you consider giving to the Texarkana Literacy Council (https://literacytxk.org/how-to-help). When everyone can read, we can all go far. 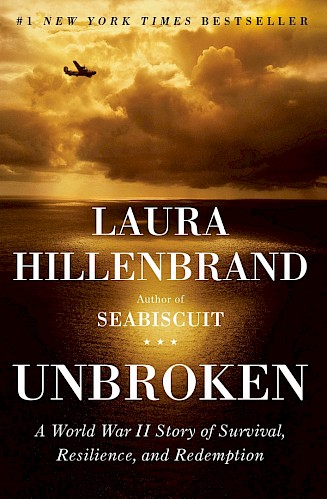